In February 2014, Anne Zouroudi won Coventry Council’s Inspirational Book Award for The Bull of Mithros, a murder mystery set in the Greek islands. In the ‘Murder & Mayhem’ category, Anne was up against heavy hitters like John le Carre (The Mission Song) and Gillian Flynn (Gone Girl), but secured by far the most votes through the power of social media.

The story begins in the summer of 2013, when social media and digital marketing expert, Claire Burdett of The Media Marketing Company, was on the hunt for some Greek-inspired fiction for her holiday in Skopelos.

Interestingly Skopelos is part of the Sporades islands and where the film Mamma Mia was mainly set – and it coincidentally inspired some of settings for Anne’s mysteries, although Claire was unaware of that at the time, as she said –

“I only stumbled over Anne’s books by accident as unfortunately her SEO wasn’t in place for Greek Islands Books and her digital footprint was pretty fragmented,”

“However, when I did come across her on Amazon I really liked the synopses of a couple of her murder mysteries set on the Greek Islands, so I ordered them in time to take them to Skopelos.

“I loved them and they were the perfect holiday read, so I downloaded a few more onto my Kindle while I was still away in Greece.

“When I got back I had another quick look on Amazon to find out if she’d written any more and happened to see her Twitter link. Of course, I tweeted her immediately, saying how much I’d enjoyed reading them and she kindly tweeted back to thank me.” 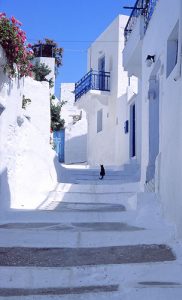 Struggling in an Overcrowded Market

A couple of weeks later Claire received another tweet from Anne: “I think I need someone like you to help me.”

Anne picks up the story: “I’m always so delighted to be tweeted by a fan, so of course I went to look at Claire’s profile. The more I clicked, the more I learnt about her social media and digital wizardry—and the more it dawned on me that I should be hiring her to help promote my books.

“It seems everyone’s an author these days, and even as an award-winner published by Bloomsbury, I was really struggling to get my books noticed in a vastly overcrowded market.

“I’d become disillusioned by my own attempts to build sales via Facebook and Twitter. That’s when I asked Claire to step in.” 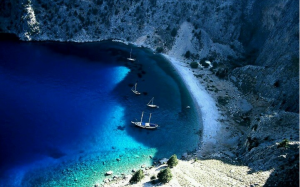 So began a happy relationship with Claire and The Media Marketing Company team sorting out and integrating Anne’s digital presence, including her SEO, her website, profiles and best practice on Twitter, Facebook, LinkedIn, and Pinterest as well as setting up Google+ and Storify.

They also set up monitoring for her keywords (including crime fiction, mysteries, as well as Greek Islands, Greece and Greek food), and her digital properties and implemented ongoing analytics so the impact of every activity could be measured.

“It wasn’t until I talked to Claire that I realised how hugely naive I’d been regarding digital media strategy,”

says Anne. “I was, frankly, clueless, and my learning curve was almost vertical. But with Claire’s guidance, my confidence grew, with great results.

“Claire provided training, a digital strategy and a step-by-step plan. We very quickly saw uplift in Twitter followers and Facebook likes and we were getting proper traffic from Google for the first time. It was very exciting.” 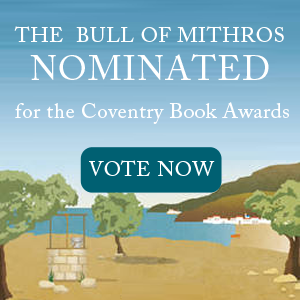 Bull of Mithros Nominated for Award

Then, in October the nominations for the Coventry Book Inspiration Awards were announced, and The Bull of Mithros was in the Murder and Meyhem Category.

“I was elated, but oh boy, was it scary! They were using an X-factor-style elimination process, with the public voting on each book and those with the least votes in each category being eliminated each week.”

Said Anne. “The Bull of Mithros was up against Gillian Flynn’s Gone Girl, which is a huge bestseller, and other luminaries such as William Boyd and John Le Carre! I felt like my little Greek Island mystery had just toddled into a bear pit and I couldn’t imagine how it stood any chance at all.  So I asked Claire for her advice.

“Luckily she had a plan to galvanise all my lovely supporters!”

Claire picks up the story: “As a fan myself I knew her other supporters would be keen to support The Bull, if they only knew about the competition. So we just went into overdrive.

“There was a four-weeks voting period and the focus became reaching Anne’s fans throughout the globe and mobilising them to take action. We needed them to click a link and register their vote — which sounds simple, but usually motivating people to do something can be surprisingly challenging.”

In the event, Anne’s fans proved loyal and willing, with the results (between November 2013 and March 2014) as follows:

“We weren’t trying to get more fans, simply to reach the fans we had, find ways to encourage them to engage more with Anne’s content and output, tell them about The Bull, and VOTE, obviously!”

“We split tested and tracked everything to see what worked and what didn’t, monitored key networks and tailored what we were saying, tracked key engagement times on Anne’s output and controlled everything within our Social Media Dashboards so posts were delivered appropriately within each time zone.It was a lot of fun and it spread like wildfire!”

At the end of each of the four weeks there was the nail-biting, X-Factor-style, accumulative voting process, when the two books with the fewest votes were eliminated.

The Bull of Mithros Wins the Award

Despite Anne’s nervousness, as the weeks went by the social media support for The Bull of Mithros grew and grew, while bestseller after bestseller fell by the wayside, until The Bull WON!

“I felt so elated,” says Anne. “To have all my fans from across the world connecting like that and voting on my behalf … well, I just felt so honoured.”

But the work doesn’t end there. Claire is at pains to point out that Anne and the team must sustain their activity in order to maintain the level of engagement that’s been achieved.

“With social media it’s all about consistency and sustaining it. If the output drops off then it can very quickly all return to Ground Zero again, which then knocks engagement, search and website traffic. Social Media Marketing is always a marathon rather than a sprint.”

Anne concludes: “I feel very excited to be given this chance of connecting directly with my fans and I am determined to keep up all this activity. My fans deserve as much of my energy as I can give—it is they who’ve made my books a success, so I intend to stay in touch and available via social media as much as possible.” 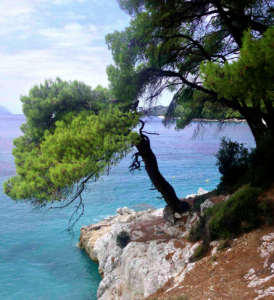 What’s Next for the Zouroudi Brand?

More award-nominations (this time panel-judged, so—to the dismay of several fans—there’ll be no voting), inclusion in Oxcrimes, alongside such crime superstars as Ian Rankin, a Shirley Valentine documentary, a Zouroudi tour of the Greek Islands—with each book’s location highlighted on Google maps—and a possible film-in-the-making of the whole Hermes series of mysteries set in the Greek Islands.

If the film goes ahead, Skopelos has already asked to be considered for location filming – seems their previous experience with Mamma Mia means they know a winner when they see it!

[View the story “The Bull of Mithros” on Storify]